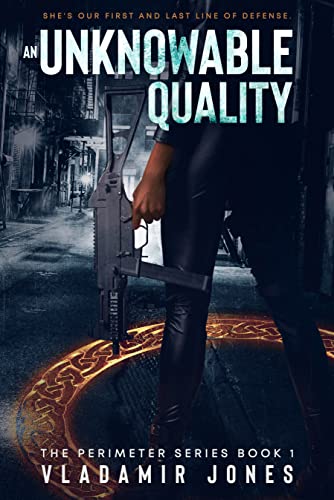 An Unknowable Quality: Perimeter: Book 1 (The Perimeter) by Vladamir Jones

Bryce McDaniel is a disgraced ex-Marine and the only survivor of the impossible massacre that left her entire squad dead.  For the last five years she has sought solace for her ruined life and the pain survivors guilt in the bottom of a bottle and taking the type high risk jobs at which her training has made her an expert. The Baptist minister's daughter was looking for annihilation, not redemption.

Redemption however came looking for her as a chance encounter puts her on the radar and in the employ of Johann Prowse, mysterious reclusive 'fixer' for Baltimore’s Occult community.

Her first assignment is a cake walk. Interview a coven of wannabe witches and help them reconnect with the man who supplied them with a drug that enhanced their rituals.

But when the supplier is found dead and mob connections begin to surface, what started out as a simple interview turns into a race against time to stop an immensely powerful otherworldly entity that feeds off nightmares from getting a foothold on the mortal plane.

An Unknowable Quality, Book 1 in The Perimeter Series , will be available for FREE download a for just a few days starting Tuesday March 29th. Get It Now and join Bryce McDaniels on her inaugural adventure.

Hungry for more?  Book 2 in The Perimeter Series: The Coyote is available now and on sale.