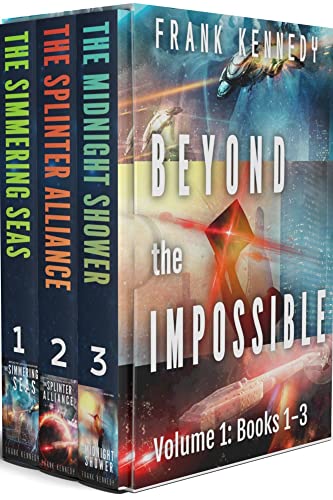 Beyond the Impossible: Volume 1 (Books 1-3) by Frank Kennedy

LOSE EVERYTHING. SAVE EVERYONE.

Kara Syung leads a life of privilege on the ringed world Hokkaido until her brother whispers his final warning: “They’re going to burn it all. Be a soldier.” His death sets Kara on a mission for justice, but powerful forces stand in her way - specifically, her family. Her only weapons? A lifelong best friend, a murderous immortal on a crusade of his own, a rogue from an old galactic empire, and a snub-nose laser pistol. In this sprawling, nine-book interstellar saga about family, greed, obsession, and revelation, lives will be shattered, complex mysteries unraveled, and horrifying enemies emerge from distant stars. Begin the journey to seek that which is Beyond the Impossible by reading the first third of the stunning nine-book series.