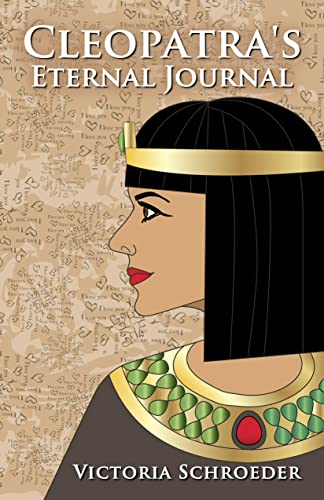 If you prefer your dictators, celebrities, and historical figures to remain silent from beyond the grave, then this is not the book for you. If, however, you’re okay with famous ghosts being greedy, ambitious, and yes, more than a little pushy, you will thoroughly enjoy the afterlife tales of:

Queen Cleopatra of Egypt, whose journal reveals a shocking 2,000-year-old secret she has taken with her to the tomb.

Colonel Muammar Gaddafi, the former Libyan president whose unrequited crush on a former US secretary of state culminates in revenge, greed, and a host of dubious fashion choices.

Steve Jobs, the Apple co-founder who, with the help of a hallucinogenic drug, plans to reconnect with his estranged father before moving on to his next billion-dollar project.


Victoria Schroeder’s Cleopatra’s Eternal Journal is a whimsical trio of globe-spanning ghost stories. Cleopatra’s spirit wryly observes major historical events over two millennia while she waits for archaeologists to discover her tomb. Colonel Gaddafi nurses an unlikely infatuation with Dr. Condoleezza Rice ardent enough to survive his death and which leads to astonishing dialogues between the two power brokers; and Steve Jobs’ ghost haunting Kyoto, seeking wisdom and maybe inspiration for some new product ideas. Schroeder’s stories are an imaginative weaving of history, levity, and humor.
—Dan Geddes, Author of The Satirist: America’s Most Critical Book