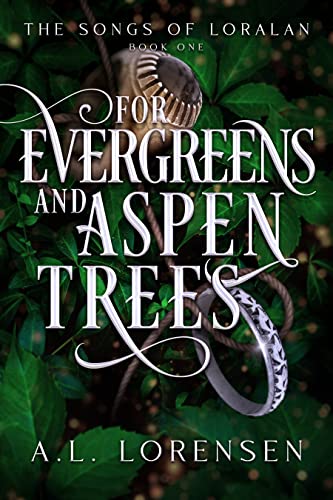 For Evergreens and Aspen Trees: The Songs of Loralan: Book 1 by A. L. Lorensen

Tristan knows this truth all too well. The twenty-year war against the magic of the Ancient Races has stolen his family, his home, and his past. He clings to the only things left to him; a scar from a wound meant to kill him, a mysterious silver ring, and the name of the place where he was snatched from death. Stationed in Fort Lorate the past five years - the only years of his life he can remember – he has done nothing but wait for the day he can pursue the fragments of his life that must be somewhere on the kingdom’s battlegrounds.

Secrets buried deep in Lorate’s roots unravel when an elven woman named Aspen infiltrates its walls, and Tristan's life is shattered in mere moments. Despite being on opposite sides of the bloody, bitter war, Tristan asks for her aid when his duties clash with his conscience.

Trying to prevent Lorate from becoming a threat to her homeland and battling a private war within herself, Aspen has every reason to gut Tristan where he stands and be done with the matter. But she doesn’t, to her eternal dismay.

Together, Tristan and Aspen embark on a journey of memories, curses, monsters, and storms. Forces both mortal and magical combine against them, and their only hope of success is to rebel against the hatred woven by war and come together as one.

For ever and always. For evergreens and aspen trees.