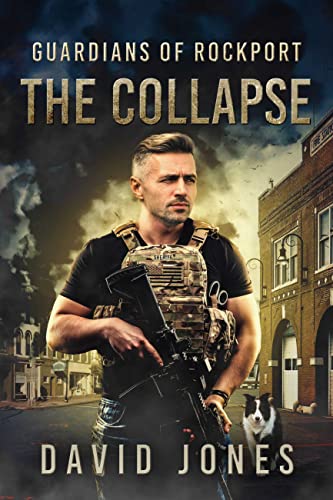 Guardians of Rockport: The Collapse by Dave Jones

In this apocalyptic thriller, the nation is amid a major financial collapse when the United States is pulled into regional wars in Europe and Asia. Suddenly, phones and internet go out, likely the cause of a cyber-attack by a hostile foreign actor. Unprepared for such a reality, society as we know collapses and chaos is the new normal.As civilization collapses around him, Doug Chapman, a retired Air Force OSI Special Agent and Wisconsin State Trooper, has prepared his family for the worst. But when his community asked him to step up once again to serve as the local law enforcement, he needs assistance. Raising a posse consisting of volunteer firefighters, teachers, and military veterans, they work together to help the small town of Rockport survive the collapse.