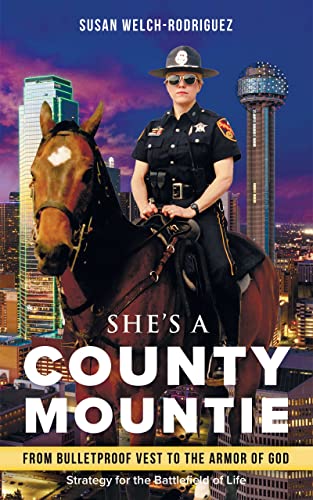 She’s a County Mountie: From Bulletproof Vest to the Armor of God by Susan Rodriguez

In shock, she looked up the barrel of his gun at point-blank range through her squad car window. With amazing strength, she kicked her car door open, knocking her attacker back, and like a Texas tornado, she grabbed for the threatening gun. Having no luck, her flashed before her eyes. Fear engulfed her like a herd of elephants. Shoot or don't shoot was the question that crossed her mind. Life is a series of choices.Deputy Sheriff Susan Welch-Rodriguez trail-blazed in her work on the streets of Dallas, Texas for over four and a half decades of hair-raising adventures, starting in the late 1970s through present day. Her suspenseful memoir, From Bulletproof Vest to the Armor of God: She's a County Mountie, follows Susan as she understands the criminal mindset and how that led her deep behind the razor wire in His Majesty's service, taking the Gospel of Jesus Christ to prisoners, encountering those she had apprehended decades earlier.Written in traditional Western-style, with troubadour-style song lyrics, Susan shoots straight from her heart, featuring personal accounts of female deputy police woman who was a force to be reckoned with. She shares advice on preparing for the battlefield of life, enabling you to overcome and conquer any obstacle.