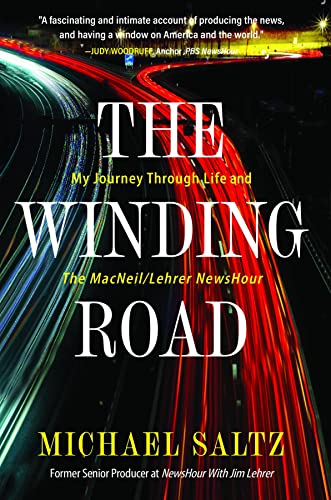 The Winding Road: My Journey Through Life and the MacNeil/Lehrer NewsHour by Michael Saltz

Home, Neighborhood, City, Country, World: Signposts in Michael Saltz's ever-expanding journey into the world and the lives of millions of people as a senior producer for The MacNeil Lehrer NewsHour, one of the most highly esteemed news programs in America. It's a road filled with twists and turns, with failures as well as triumphs. And stories.

Some stories are personal, like having polio and listening to Bach as a young child. Others are the stories he encountered and helped create as a senior producer at The MacNeil/Lehrer NewsHour, where he worked from before its inception in 1975 until his retirement in 2009. There are stories about big domestic events like the near-catastrophic nuclear meltdown at Three Mile Island and almost invisible ones like the suicide of a 16-year-old girl in upstate New York. There are the stories of largely unknown people he meets along the way: a worker at the dying Kansas City Stockyards, a folk singer in Arizona still blackballed by her fellow musicians decades after national fame, a legendary (if largely invisible) old musician in New Orleans. But also stories about more famous people like Robert Motherwell and Frank Herbert. And then there also are stories about events in revolutionary Iran, regime change in Rhodesia, Muamar Gadhafi's Libya, and Moscow in the waning years of the Soviet Union. And so many more.

The NewsHour's Essays, helmed by Saltz between 1985 and 2009, were a favorite of many viewers. Roughly 1500 programs ended with these four to seven-minute commentaries that won an Emmy and two Peabody Awards.

Along the way, we learn much about the creation of MacNeil/Lehrer and its evolution. We meet both MacNeil and Lehrer and what it was like to work for them. Also, there are reflections about many of the 57 writers who Saltz gathered to help create the essays. And too, there are observations about the creation of art, television, television news, and what he saw and made of everything along his journey. Clearly, it's a journey that has never ended.